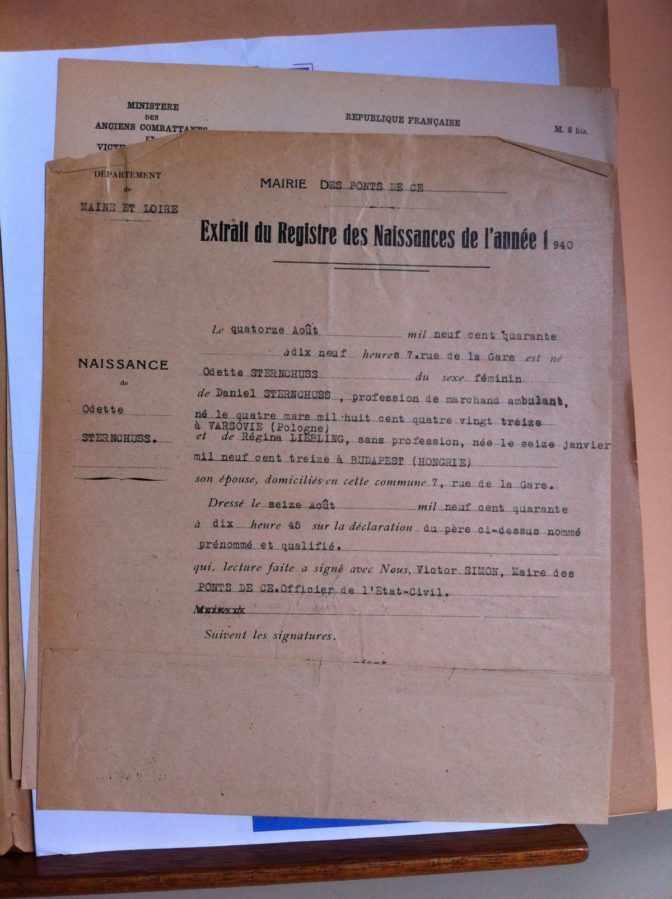 Odette was the youngest of Daniel and Régina Sternchuss’s five children. She was born in les Ponts-de-Cé on August 14, 1940. Her father was 47 and her mother 27. Her parents were both of Polish origin. Daniel Sternchuss (Sternszuss) was born on March 4, 1893 in Warsaw at a time when Poland was Russified and annexed to the Russian Empire. His wife, Régina Leany Liebling, was Polish, but born in Budapest in the Austro-Hungarian Empire on January 16, 1913. Daniel Sternchuss left Warsaw and immigrated to France in 1919 with his parents, Kiwa and Rebecca Sternchuss, and his elder brother David (Elja) Sternchuss. Régina Liebling immigrated to France with her father, Joseph Liebling, in February of 1923. Their history was similar to that of many Polish immigrants: The Sternchuss and Liebling families settled in Paris. Daniel Sternchuss was later to be a peddler in the Marne Department, at Épernay in 1921, then in Reims in 1925. After a stay in Bourges in the Cher Department, Daniel Sternchuss took up residence on May 4, 1932 in Angers (10, rue de la Parcheminerie). Régina Liebling also settled in Angers in December 1929, where she lived with her parents at n° 8 rue Grille, on the opposite side of the Maine River. She was an apprentice salesgirl after having spent several weeks as a maid for an Angers baker who at that time lived in Sainte-Melaine-sur-Aubance (La Mare Biotte). Thus, it was probably in Angers in 1929-1930 that Daniel Sternchuss and Régina met. The couple lived at n° 3 rue Baudrière in Angers after their marriage, before moving to n° 6 rue Saint-Nicolas. They sold clothing and hosiery on the markets in Anjou.

Their first three children – Nathan (October 10, 1931), Mina (March 19, 1933, and Lola (August 8, 1936) – were born in Angers. It was in 1938 that things changed for Odette’s her two oldest sisters, her brother Nathan, and her parents. On March 29th Daniel and Régina got married (there is no information available for a religious wedding), and then obtained French citizenship in May for their son Nathan, and their two daughters, Mina and Lola, under the terms of article 3 of the Law of August 10, 1927. In the summer of 1938 the whole family left Angers for les Ponts-de-Cé (7, rue de la Gare). The family grew bigger with the birth of little Simone on November 29, 1938. The parents of these four French children (Simone was naturalized in January 1939) then requested their own naturalization in 1939.

Then came the war. Odette’s grandparents, Kiwa and Rebecca, left Paris (n° 31, rue des Jardins-Saint-Paul in the 4th district) on September 8, 1939 to go live in les Ponts-de-Cé. Daniel enlisted in the army on April 5, 1940 for the duration of the war. He served with the army supply corps in Angers. When the debacle occurred he was taken prisoner on June 29, 1940 at Maulévrier, a few kilometers south of Cholet. It is not known if he was released, but at any rate he returned home several days later. His house had been bombed and his family had been living since June 18, 1940 with his brother, David Sternchuss, a tailor by trade, in Angers at n°39, rue du Mail. Odette was born a few weeks later on August 14, 1940 in les Ponts-de-Cé and was declared French on September 30, 1940. The volunteer soldier Daniel Sternchuss was demobilized on October 4, 1940. That same day he signed the register that inventoried the Jews in the district of Angers. He was the second person in the whole district to have his family inventoried as Jewish, including Odette, who was just six weeks old, as well as his parents, at his address in les Ponts-de-Cé. At the beginning of December 1940, the Sternchuss family moved back to Angers. Odette and her four siblings went with their parents and grandparents to live at n° 52 Chemin des Petites Pannes.

Then began the period of persecution. Daniel was able to continue selling clothing and hosiery on the open markets, but on March 11, 1941 by order of the Préfecture he had to discontinue his work as a stallholder. His meager stock of merchandise was stored in his bedroom and his business was plundered by being “aryanized” on September 30, 1941. The “aryanization” of his business was entrusted to two provisional administrators; the certified public account Libbrecht was appointed in December 1940, but was replaced after his death by Pierre Poisson, who completed the process, bringing him 200 francs in fees.

Then on June 7, 1942, several days after the death on May 24, 1942 of her grandfather, Kiwa Sternchuss at the age of 80 (born in 1863 at Kałuszyn), Nathan, his sister Mina, his parents and his grandmother were forced to wear the yellow star.
Her father and her uncle David were arrested during the big roundup on the 15th-16th of July, 1942 (Daniel on the 15th) and deported in convoy n° 8 on July 20, 1942 directly from Angers to Auschwitz –Birkenau. Daniel Sternchuss was selected upon arrival to die on October 5, 1942. He was 49 years old. Nor did his uncle David, aged 51, ever come back from Auschwitz. On September 19, 1942 it was the turn of her 5-year-old cousin, Monique Liebling (the daughter of Joseph Liebling and Berthe Malamed, born in Paris on June 4, 1937) to be arrested, along with her maternal grandmother, Freda Malamed (née Kijener at Charkofka, Russia in 1872). The SIPO-SD (special security services) of Angers came to arrest them at n° 12 rue Louis Leroy at the home of Jacques and Léa Fajnwaks, who had taken them in (1). Interned in the La Lande Camp at Monts (Indre-et-Loire department), they were both deported from Drancy on September 23, 1942 in convoy n° 36. They were murdered upon their arrival at Auschwitz-Birkenau on September 28, 1942. Freda Malamed was 70. Monique Liebling was 5.
Thus it was without their father, interned in the Grand Séminaire on the rue Barra in Angers  from the 15th to the 20th of July, and without their mother, interned at the departmental mental asylum at Sainte-Gemmes-sur-Loire, that Odette and her brother and sisters were placed for a while with a family friend, Mlle Frouin, at n°8 rue des Cosnes in Château-Gontier (Mayenne department). No one knows how long the five children stayed in Château-Gontier — a few days, a few weeks?
What is known for certain is that their arrest took place in Angers. Having returned to their grandmother’s at n° 52 Chemin des Petites Pannes, Odette, her brother, her three sisters, were arrested  with her during the roundup of October 9, 1942. Taken also to the Grand Séminaire on the rue Barra, Rebecca Sternchuss, who was 75 years old (born in 1867 at Kałuszyn), and her five grandchildren aged 2 to 11 were interned on October 17, 1942 in the Drancy camp. They were to remain there for a month. On November 14, 1942 Odette, her brother and sisters, and her grandmother were “freed” and remitted to the UGIF (General Union of the Israelites of France). The children were then separated. They became part of what is known as the “blocked” children, those who had already been arrested and interned, then freed by the Germans and entrusted to the UGIF. These children were born of foreign parents and flagged as being “deportable” at any moment(2) . Odette, who was scarcely two years old, was put in the nursery at Neuilly-sur-Seine (67 rue Edouard Nortier). Her big brother, eleven-year-old Nathan, was probably sent to the rue Lamarck Center at the foot of Montmartre in the 18th district, since he was one of the 79 children transferred after the bombing on April 20, 1944 to the Secrétan Children’s Center in the Lucien-de-Hirsch School at n° 70 avenue Secrétan in the 19th district. Her three older sisters —. Mina (9 years old), Lola (6), and Simone (soon to be 4) – were placed in the UGIF orphanage at n° 9, rue Guy Patin (Guy Patin Center) in the 10th district. Their grandmother was probably with them.
The big roundup on February 10, 1943 carried off Rebecca and her three granddaughters. Mina, Lola and Simone were among the 42 children rounded up at the Guy Patin Center and immediately “re-interned” with their grandmother in the Drancy camp. On the next day, February 11, 1943, Rebecca Sternchuss was deported with her three granddaughters in convoy n° 47 to Auschwitz-Birkenau. They were murdered upon arrival on February 16, 1943. Rebecca was 75, Mina was 9, Lola, 6 and Simone, 4.
Nathan, one of the 79 children rounded up at the Secrétan Center by the Gestapo on July 22, 1944, was interned in the Drancy camp on the same day. Odette was in turn rounded up and interned at Drancy on July 25th with 16 other children from the Neuilly nursery. She was deported on July 31, 1944 in convoy 77 to Auschwitz-Birkenau along with her big brother Nathan. She was murdered on August 5, 1944 upon arrival at Auschwitz-Birkenau. She was not yet 4 years old.

Article written by Alexandra, Chloé, Zoé and their teacher, Bertrand Bossy (Renaudeau High School, Cholet, 11th grade, May 2018) as part of the project “Polonais et Allemands : émigrés, expulsés et persécutés (1880-1945)“ [Poles and Germans: emigrants, exiled and oppressed (1880-1945)]. ACTIONS ÉDUCATIVES LIGÉRIENNES, Région Pays de la Loire, 2017/2018.
(1) Jacques Fajnwaks slipped out of Angers at the beginning of July 1942 and passed into the Free Zone, leaving his wife Léa (née Malamed, his mother-in-law, Freda Malamed, and his niece, Monique Liebling, at n° 12 rue Louis Leroy. His wife was arrested on July 15, 1942 and deported to Auschwitz-Birkenau in convoy n° 8 on July 20, 1942, where she was murdered in 1945.
(2) https://yadvashem-france.org/la-vie-du-comite/histoires-du-reseau-villes-et-villages-des-justes-de-france/les-justes-parmi-les-nations-de-lombron-sarthe-et-de-sa-region/lugif-et-ses-centres-denfants

Inventory of the STERNCHUSS family (October 4, 1940)

Inventory of the FAJNWAKS-MALAMED family (October 7, 1940)