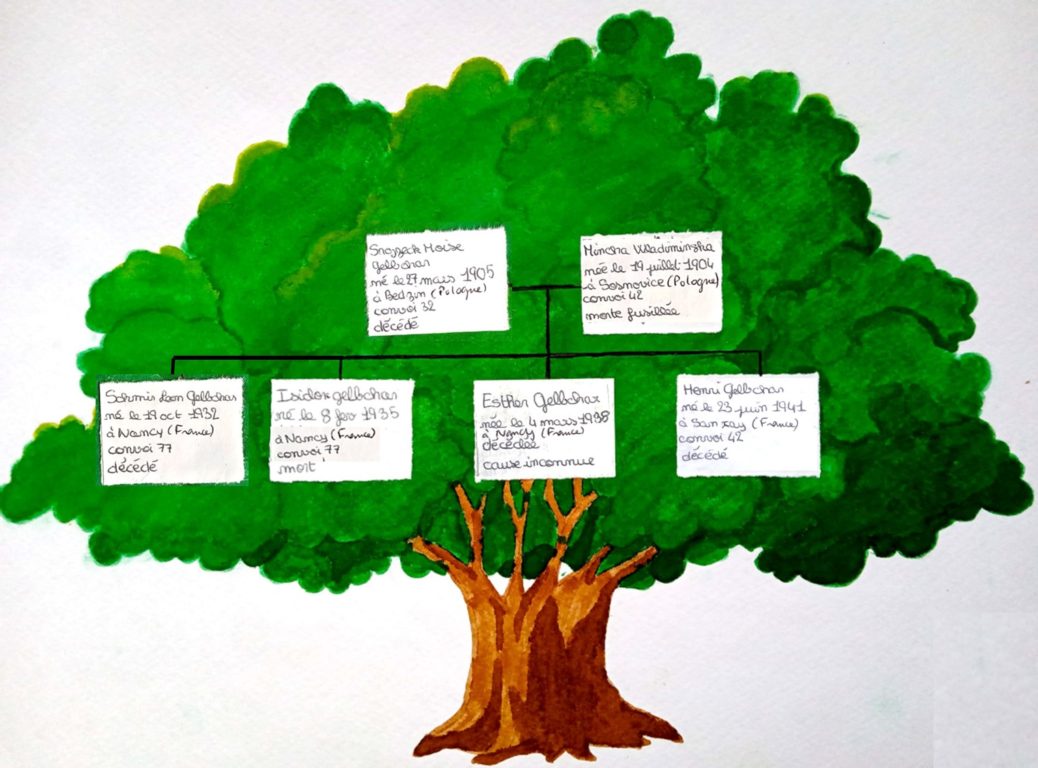 This biography was written by 9th grade students from the “Queen” class at the Fernand-Léger middle school in Vierzon, in the Cher department of France, together their teacher, Ms. Floride Mahieu, during the 2021-2022 school year.

Before writing the biography of Isodore Gelbchar, the 9th grade students from the “Queen” class at Fernand-Léger middle school in Vierzon first learned all about the Convoy 77 nonprofit organization and read all the information and records provided. They then split up into groups according to themes that they themselves determined: the childhood, deportation and remembrance of Isodore Gelbchar. They chose to write the biography in a historical and scientific manner and to avoid romanticizing or inventing events in his life. We also received additional archived material from the Holocaust Memorial Museum in Washington DC and lastly, on May 2, 2022, Henri Rosenfarb, a cousin of Jacques Holz, another Convoy 77 deportee who was researched by another class in the school, came to the college to speak about his own research. Here is the press article featuring the meeting with Mr. Rosenfarb (on the left of the photo). 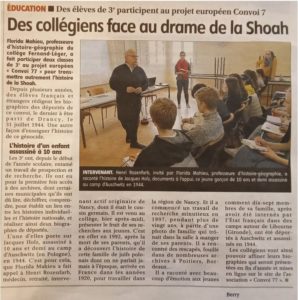 “Middle school students confront the tragedy of the Shoah”, Le Berry Républicain, May 3, 2022.

A number of students in the class presented this topic, their research, and what they had learned and experienced during their oral examinations for the Diplôme national du brevet, (which allows students to be admitted to high school). What follows is the result of their work.

Isidore Gelbchar was born into a Jewish family in Nancy, in the Meurthe-et-Moselle department of France, on February 8, 1935. He was the son of Srojzeck Gelbchar and Mincha Wladiminska[1], who was born on July 19, 1904 in Sosnivice, Poland[2]. When he was born, he was not a French citizen. It was not until May 16, 1939 that he acquired French nationality by declaration[3]. He first lived at 1, rue de la Hache in Nancy, in Meurthe-et-Moselle. Here is a map showing where in France Nancy is located: 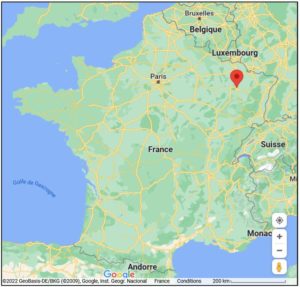 He was most likely the younger brother of Léon Gelbchar, who was born on October 19, 1932 in Nancy and also lived on rue de la Hache[4].
However, at the beginning of the Second World War, Meurthe-et-Moselle was occupied by the Germans[5]. During the war and due to the collaboration between Philippe Pétain’s regime and Nazi Germany, French Jews were treated in the same way as German Jews. They were imprisoned and deported to concentration camps or killing centers. As a result, 76,000 Jews, including more than 11,000 children, were deported by the Nazis and murdered[6]. We found a photograph of rue de la Hache taken during the Second World War: 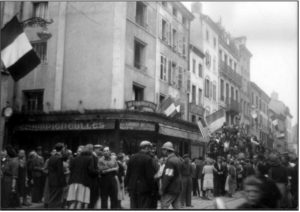 Photo taken from the corner of rue de la Hache and rue Saint-Dizier on September 15, 1944[7]

2. The move to Sanxay and the deportation of the family

It was no doubt due to Nancy’s proximity to Germany and the German occupation of France that Isidore and his family left for Sanxay, in the Vienne department of France, which was Isidore’s “last known legal residence”[8]. 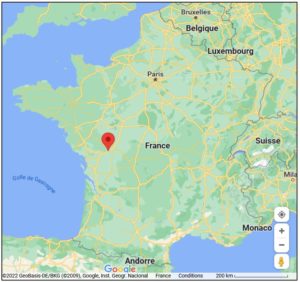 Despite this attempt to escape, Isidore was separated from his mother, Minicha Gelbschar, at the age of 7, since she was deported on November 6, 1942 on Convoy 42 from Drancy to Auschwitz [9].

Isidore Gelbchar was one of the many victims of anti-Semitism that took place under Hitler’s totalitarian regime. He was interned in a camp at Drancy, northeast of Paris, on July 22, 1944, when he was only nine years old. He was then deported from Drancy on Convoy 77 on July 31, 1944 to Auschwitz, in present-day Poland. His brother, Léon, who was twelve years old, was deported at the same time[10]. The convoy was put together in haste since the Allies were approaching the French capital[11].
We know that the traveling conditions and the arrival in Auschwitz were very tough, since all the deportees were crammed in together, and from various testimonies we learned that life in Auschwitz was atrocious. If he made it there alive, he may have been examined by a doctor to assess his physical condition. It is known that when it arrived in Auschwitz, Convoy 77 was carrying 986 men and women and 324 children, a total of 1310 people. 836 of them were immediately sent to the gas chambers. Isidore was most likely one of them.
A court judgement later set the date of Isidore Gelbchar’s death as August 5, 1944[12], two days after the convoy arrived in Auschwitz.

4. Official acknowledgment that Isidore was deported

By following the trail of administrative records after his death, we can trace what happened from the 1950s to the 1970s. For instance, in 1958, a declaration of death was made at the Sanxay town hall. On October 21, 1970, the Ministry of Veterans and Victims of War asked for further confirmation of his death, and the Sanxay town hall replied by letter on October 27, 1970[13].
On August 16, 1972, Isidore Gelbchar was recognized as having “Died for France” and three days later, on August 19 the words “Mort pour la France”, were added to his death certificate in Sanxay.

The official stamp stating that Isidore Gelbchar “Died for France”[14] 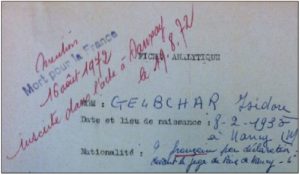 A handwritten inscription with the “Mort pour la France” stamp[15]

These words are added when a death is the result of an act of war, whether it occurred during the conflict or afterwards[16]. Isidore was awarded the distinction “Died for France” after his death because he died during the Second World War. The French National Office for Veterans and Victims of War (ONACVG) is responsible for handling “Died for France” claims.
Other records refer to the status of “political deportee”. In a letter dated April 28, 1972, from the chief of the deported and interned persons card department, the words is “the status of political deportee could have been granted to Mr. GELBCHAR Isidore” are underlined in red[17] while an “analysis sheet” says “he would have been a D.P. (political deportee) had a request been made”[18].

Description of Isidore Gelbchar as a “D.P.” (political deportee)[20]

We do not know if he was eventually awarded this distinction, but if so, it would have been the second, following the acknowledgement that he had “Died for France”.
Isidore Gelbchar’s name is inscribed on the Wall of Names at The Shoah Memorial. in Paris. This memorial dates back to the war, when a secret collection of records was started in order to gather evidence of the persecution of the Jews[21]. The wall lists the first and last names of the deportees, together with their year of birth.

Isidore Gelbchar’s name and year of birth as it is inscribed on the Wall of Names at The Shoah Memorial. in Paris[22]

To conclude this biography, here is the Gelbchar family tree: 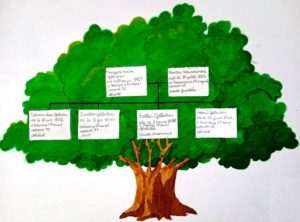