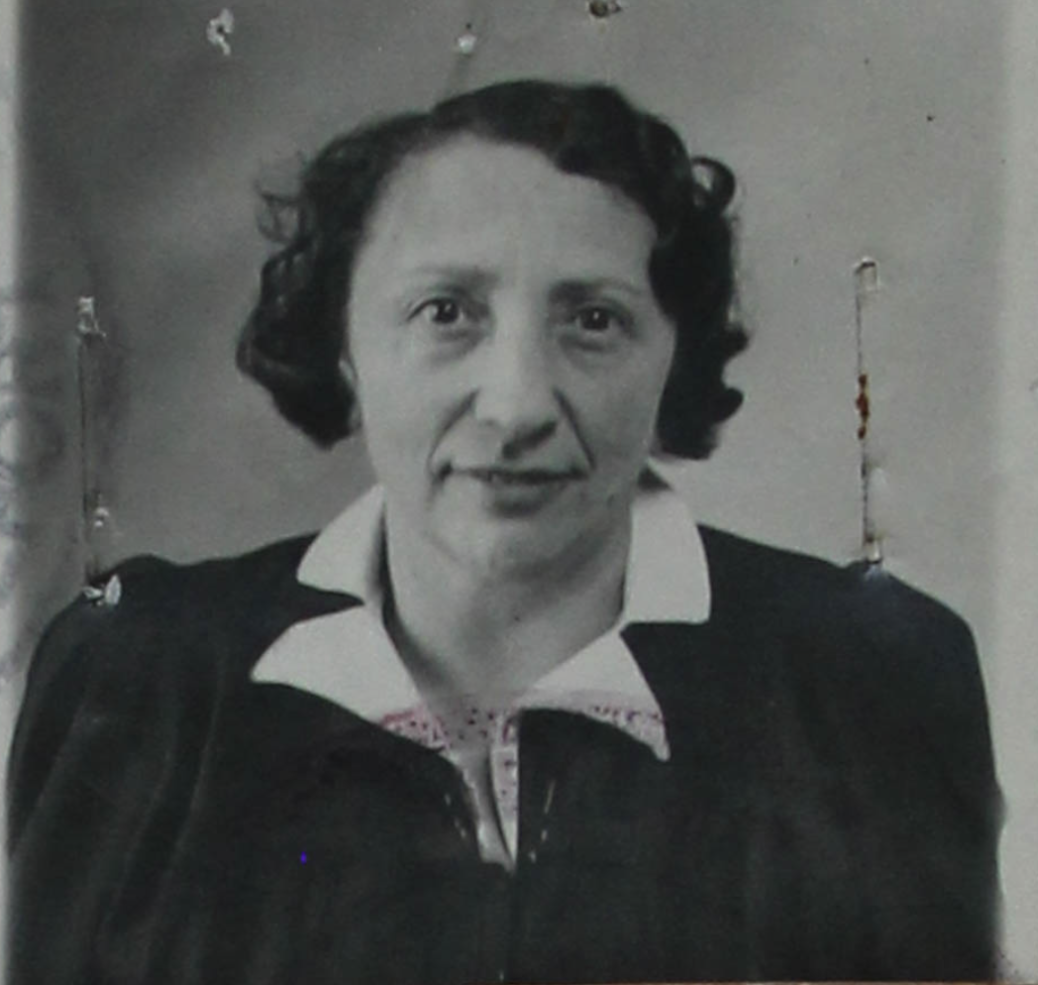 Marguerite Schwob was Louis Levis’s wife. She was born in Mulhouse, Alsace, on September 14th, 1889. Her name was not Marguerite on her birth certificate but Margaretha because Mulhouse (Mülhausen in German) had been part of Germany since 1870. 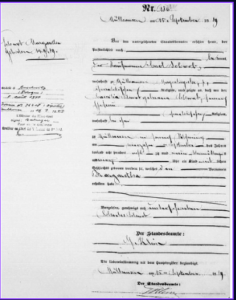 Mulhouse had the largest Jewish community in Haut-Rhin. A synagogue was built in 1848. After 1870, many Jewish left Alsace for France because they were very attached to their French citizenship. 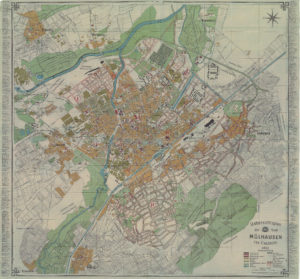 Marguerite’s father, Charles Schwob, who also worked in the textile industry, decided to stay in Mulhouse, probably for financial reasons. And after all , it was not so difficult to cross the border and to go France. There was a close relationship between the Jewish community of Belfort and the one from Mulhouse.

Marguerite had a little sister who was called Sarah Lucie Schwob. Her nickname was Sorel. She was also born in Mulhouse,on March 17th 1893.

The two sisters had a very close relationship. 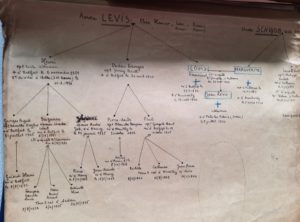 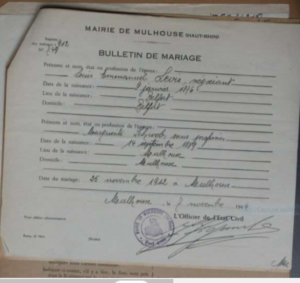 Marguerite got married to Louis Levis in 1912 in Mulhouse. She was 23 and her husband Louis LEVIS 36. Looking at her picture, we can see that she was probably a brown-haired girl and she looked very sweet. They lived at 3 rue or avenue de la Gare (then Avenue Wilson). 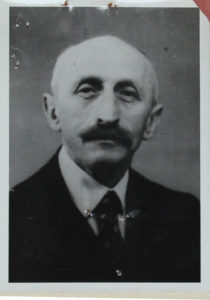 They lived at 3 rue or avenue de la Gare (then Avenue Wilson). 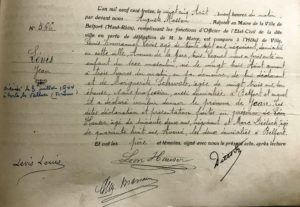 Marguerite’s father died before her marriage in 1912. Her mother, Cecile Schwab in 1921 .

Marguerite’s family was not as wealthy as the Levis family but Marguerite had a nice dowry. When her mother died in 1921, she inherited a large piece of land.

Her sister got married to Philippe Michel but they did not have any children. Consequently, they spent much time with their nephew.

Marguerite had only one son. Why ? Was it of her own choice or did she have a health issue ? We do not know but she could rely on her sister and brother in law to raise Jean.

In Belfort, Marguerite was probably a housewife, even if she had servants. She looked after Jean. Jean was not a healthy boy, so we assume that Marguerite was an overprotective mother. 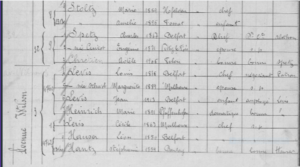 Louis, her husband, was a wise business man and life seemed quiet until 1935.

Marguerite was probably very worried about her son but her family did everything to reassure her.

Unfortunately, in 1940, Jean was mobilised and had to leave for his regiment. Imagine Marguerite’s anguish !

He was mobilised on January 23rd 1940 but he was assigned to the army auxiliary service because he was not in good health. His eyesight was poor and he weighed only 53 kilos.

As for Louis and Marguerite, we believe that they left Belfort from June 1940.

It is true that in 1940, people were not as quickly informed as today. The existence of persecutions in Germany was known but the Jews felt protected by their French nationality.

They made the right decision by going to the Free Zone.

Firstly they had planned to go to Montpellier but finally settled in Lyon, with Marguerite’s sister and her husband. They lived near  the great synagogue on Tilsit Quay. And their main address was 26 rue d’Aubercour in Lyon.

Lyon was also a major centre of the textile industry so they would be able to work and have a steady life.

Louis had also planned to leave with money. This would make it easier to rebuild everything.

But Marguerite could not stop thinking about her only son. Where was Jean ? What happened to him ? Was he still alive ? Fortunately, she had her dear sister at her side, to talk to and overcome her anxiety.

Did Jean go to Lyon straigth away or did he stay in Belfort for a while ? We do not know. Thanks to the military record, we can notice that in 1941 he lived at 3 rue de l’Hôpital in Lyon so we suppose he was there with his parents. What a relief it was for Marguerite !

The family was able to work again and life was quiet until 1942. Jean apparently had a girlfriend. He spent much time with his parents, his uncle and aunt.

The invasion of the southern zone on November 11th, 1942 resulted in the occupation of all of French territory. Jewish people were more and more persecuted and deported.

And from 1943 in Lyon, Klaus Barbie, the Butcher of Lyon, persecuted the Jewish and  the members of the French resistance. Life became actually more and more difficult for the Levis. They were hunted down and lived in different places to avoid being arrested.

Paul Touvier was eventually appointed head of the intelligence department in the Chambéry Milice under the direction of the SS Klaus Barbie. In January 1944 he became his second regional head. On 13 June 1944, the French militia, with Paul Touvier at his head, entered the synagogue of Lyon and arrested all those present.

Is there a link between that event and the fact that the Levis family   got arrested almost a few days after ? We do not know but it is disturbing.

The family knew that they were in danger because their sister- in-law Jenny had been deported in March.1944. Jenny Barth was George’s Levis wife and George, Louis’s youngest brother.

Jean was the first to be arrested. We have no idea about the circumstances and the date but he was taken to the Montluc prison. Was it because he was a Jewish or because he was a resistant ? We do not know. 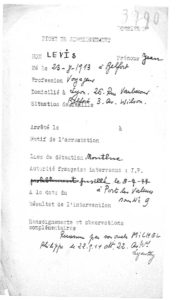 He was shot down by the German army on July 8th 1944 in Portes les Valences, a small town close to Lyon. (under the number 9) He was killed against the wall of the station and in retaliation for a sabotage in the station.

A police report was written after the slaughter. There were also pictures : Jean was recognized by his uncle thanks to those photos, a few months later after his death. We saw one of the picture : Jean looked younger than his age. The photo is unbearable because Jean chose to face death. He died with his eyes wide-open. He looked so young. In the police report, they thought that he was 25.

Louis and Marguerite were interned on June 27th 1944 in Lyon and arrived in Drancy Internement Camp on July 3rd.

In Drancy, Marguerite learnt her son’s death… She was in despair. She would never know that her sister and her husband would bury Jean in the Jewish cemetary of Belfort, a few months later. 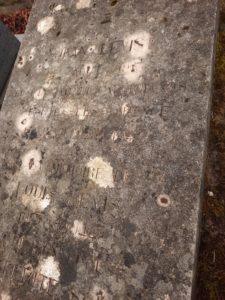 Louis and Marguerite were sent to Auschwitz on July 31st. 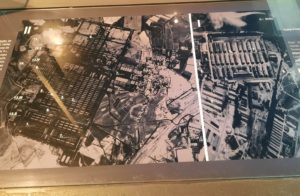 Marguerite spent 3 days and 3 nights in the train to Auschwitz. The cattle trains were full. No water, no food.. Fear and promiscuity. And death at the end of the road. She was not killed immediately. She died on August 5th 1944. She was only 55 years old. She had lost everything. 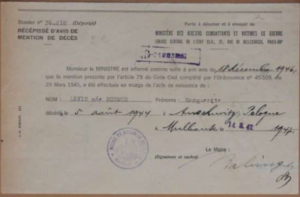 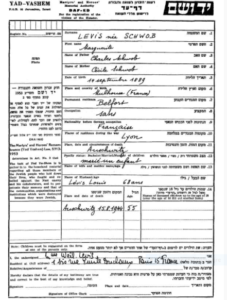