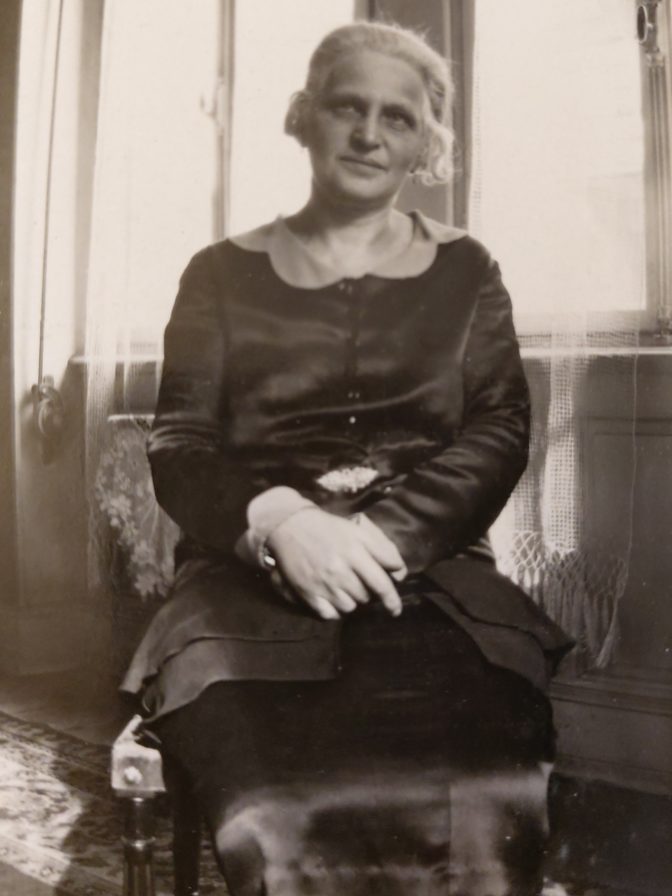 This photograph of Florence is from the family archives. It was probably taken before the war at her home on Boulevard Clémenceau, in Strasbourg.
Florentine Loeb, usually known as Florence, was the daughter of Aron Loeb, a textile merchant from Reichshoffen in Alsace. After his first marriage to Sophie Kauffmann, who died in 1856 and with whom he had three children, he married Françoise (called Fanny in the German records) Hemmerdinger, originally from Fegersheim, Alsace, on February 7, 1865
They lived in Niederbronn, Alsace. They had five daughters. Florence was the last of them. She was born on November 21, 1876 in Niederbronn-les-Bains.
Her half-brother, Isaac Loeb, a child of her father’s first marriage to Sophie Kauffmann, was happily married to Florine Marx from Mulhouse, in Alsace. A chidour (arranged marriage) was arranged between Florence and Florine’s brother, Simon Marx.
Florence was thus married at the age of 24 on July 8, 1901 in Niederbronn-les-Bains to Simon Marx, who was 31 years old and born in Mulhouse on September 28, 1869. He was the second of four siblings. The couple lived in Mulhouse. They had two children there: Albert, who was born in 1902, and Madeleine, who was born in 1905 and was the only one to survive the Holocaust.
Simon, who studied Fine Arts in Mulhouse, was a fabric designer and sales representative. He worked for the Lentz company. He traveled throughout Central Europe, the Balkans, the Scandinavian countries and even as far as Algeria.
A lover of literature, his wife Florence was part of the intellectual and social circles in Mulhouse. She even wrote a few articles that were published in a newspaper in Geneva, where one of her sisters lived. However, she was also an outstanding pastry chef.
They moved to Strasbourg before 1920. We are not sure exactly when they moved, but Albert, the elder, did his secondary studies at the Kléber High School in Strasbourg while Madeleine studied literature in Geneva in 1920 and then went to the Pigier School in Strasbourg in 1921.
In 1920, the city of Strasbourg published a directory in which Simon Marx was listed at 19, boulevard Clemenceau. This was their last known address prior to their departure in 1939. 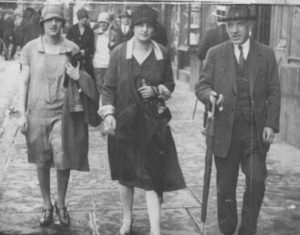 From left to right, Madeleine, Florence and Simon in 1925. Source: family archives

Their daughter Madeleine got married in Strasbourg in May 1929 to Robert Blum. They had two sons, Alain, born in 1930, and Pierre, born in 1932.
At the beginning of 1939, before war was declared, Robert Blum, who felt the tide turning, decided to move his family out of Strasbourg. He, his wife and his son Pierre left for Vichy, in central France. Their oldest son, Alain, was still at boarding school in Switzerland. Robert then returned to Strasbourg to organize his permanent departure. In May 1939, he went back to join his family in Vichy, where they rented an apartment at 30, rue Mounin. When Strasbourg was evacuated, Simon Marx, his wife Florence and their son Albert came to live with them in the apartment.
In July 1940, the French government moved its headquarters to Vichy. In June 1941, the family split up. Robert, Madeleine and Pierre moved to Valence, also in the free zone. However, Simon and Florence, together with their son Albert, went with some friends from Mulhouse, the Uhlmann family, to seek refuge in Lapalisse, in the Allier department. There they registered themselves as French Jews, as required by the French government’s anti-Jewish law of June 2, 1941.

On this document, we see that Simon Marx was staying in the Sisters of Lapalisse hospital. He died there on June 11, 1942. Madeleine, his daughter, had his body repatriated at the end of the war and he was then buried in the Cronenbourg Jewish cemetery in Strasbourg.
Florence and Albert were living in a nearby hamlet called Petit Paris. 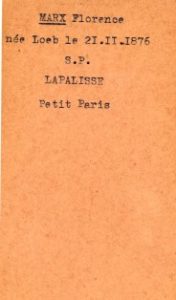 A witness told Madeleine that during a roundup on June 30, 1944, Albert went down to see what was going on and spoke to a Nazi in perfect German. The soldier asked him for his identity documents. They had no false ID and thus were arrested during this roundup, which was organized by the collaborator Georges Jany Batissier, a former police commissioner.
This collaborator, Batissier, alias Captain Schmidt, set up a brigade of twenty-two French agents for Hugo Geissler, the head of the Nazi police in Vichy. It was in his role as leader of this brigade, along with the Nazis, that he went to Lapalisse on June 30, 1944.
They were interned at La Mal-Coiffée, a German military prison in Moulins, until July 15, when they were transferred to Drancy camp, where Florence was registered as number 25145.
They were deported from Drancy to Auschwitz on July 31, 1944 on Convoy 77. Florence was murdered on August 5, 1944 in Auschwitz.

Source of the record above: Shoah Memorial, record number C77_41

At the end of August, Lapalisse was liberated. 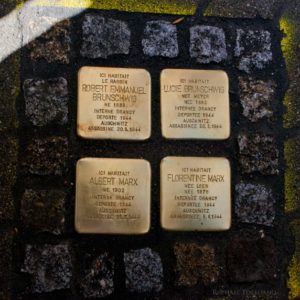 Stolpersteine have been laid at 19, boulevard Clémenceau in Strasbourg, where Florence and Albert lived.

Robert, Madeleine, Alain and Pierre Blum all survived the Shoah. Pierre was my (Karine Benarroch) father. This biography was made possible through Alain and Pierre’s recollections as well as those of Madeleine, which she passed on to her grandchildren.[:pl]