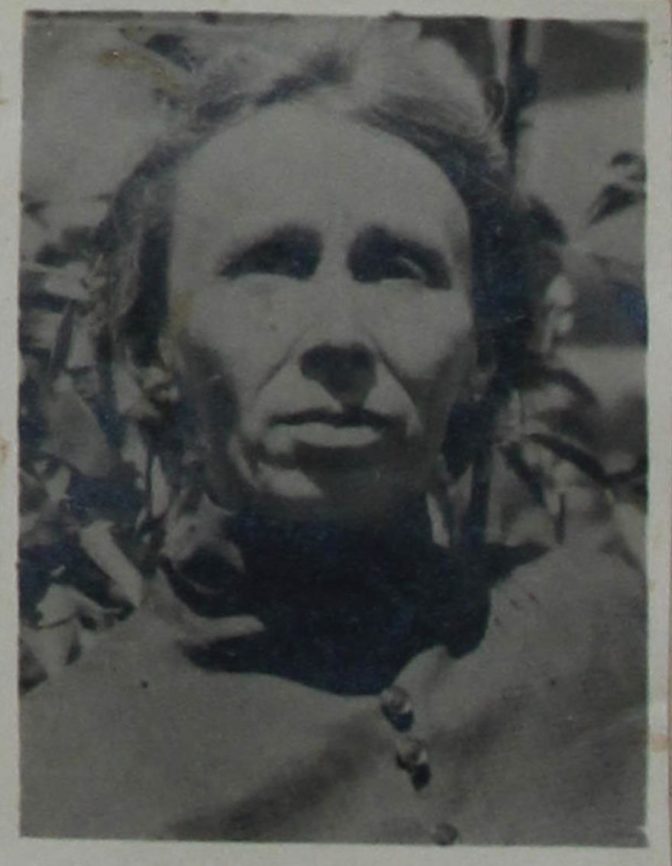 Clarisse Weill was born in 1879 and grew up on her parents’ farm in Pontailler-sur-Saône, in the Burgundy region of France. It was there that she was arrested in July 1944, before being sent to Drancy and deported to Auschwitz by Convoy 77 on July 31, 1944.

Clarisse Weill was born on December 4, 1879 in Pontailler-sur-Saône, a village of about 1,300 residents located to the west of Côte-d’Or, about 25 miles from Dijon. She was the second daughter of a family of five children. She had three sisters, Fanny, Clarisse and Henriette, and two brothers, Jules and Louis. 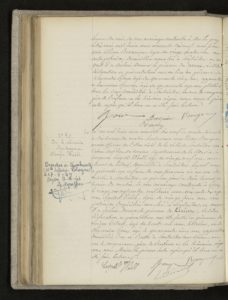 Her parents were Léopold and Rachel Weill, née Walch, both from the Alsace region. Her father was a cattle merchant and her mother a housewife. He owned a farm on rue Saint-Jean near to the Vieille Saône river. He continued to manage the farm until his death in 1905. Louis Weill then took over the management of the family farm with the help of his brother, Jules. The family also sometimes employed a servant or a clerk.
For a decade or so they lived with their uncle Isaac Weill, Léopold’s brother, his wife, and their three cousins Albert, Edmond and Berthe. They then left Pontailler-sur-Saône to settle in Dole, in the Jura department, at the end of the 19th century. 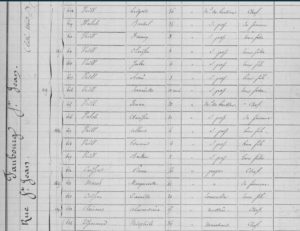 View of Pontailler-sur-Saône in around 1900 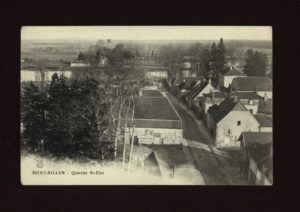 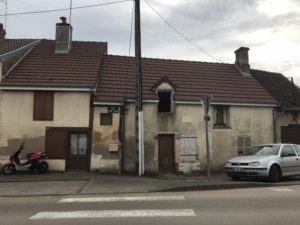 The is presumed to be the Weill’s house since numbers given in population censuses often changed.
During the Great War her brother Jules was mobilized on August 2, 1914. He served in the Infantry and then in the Heavy Artillery Corps. He was twice evacuated to hospital because of illnesses contracted at the Front. Louis was discharged by the Auxonne Reform Commission on August 17, 1914 due to “cretinism” (sic). One might imagine that this was a ploy to prevent the other two brothers from being sent to the Front.
Clarisse spent most of her life in her small hometown. She appears to have left for a few years around 1936, given that there is no mention of her on that year’s census, but there is no other information about this period of her life. On the various population censuses, it is noted that she was out of work. It can be assumed, however, that she was a great help at home, participated in the farm work and that she was in charge of some of the household chores. Her mother died in 1935.
When war broke out on September 1, 1939, only 4 people lived on the family farm: Clarisse, her brother Louis, her sister-in-law Alice and Alice’s mother, Pauline Lévy, who had come to live with her daughter and son-in-law. The Weill family soon experienced the anti-Semitic measures imposed by the French state and the Nazi occupiers. Clarisse had to fill out a document confirming her parentage, in accordance with the law of June 2, 1941. Her brother Louis completed the same document. On the other hand, he did not put the word “Jew” on his identity card and did not wear the “Jewish insignia”.

Extract of a letter from the Prefecture, dated June 13, 1944 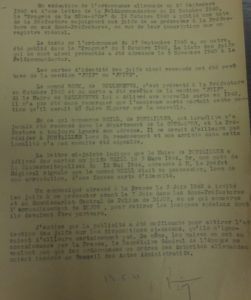 Document issued by the French state requiring Jews to register themselves 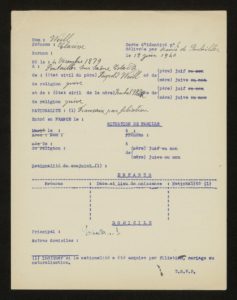 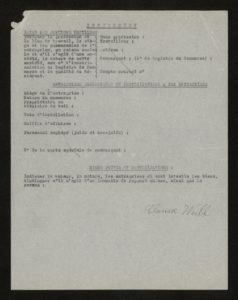 On February 1, 1942, Louis was banned from practicing as a cattle dealer. His animals were confiscated. This was the result of spoliation proceedings, an important component of the anti-Semitic policy initiated in 1940. Life was becoming increasingly difficult for the family.

Extract from the Côte-d’Or confiscation records 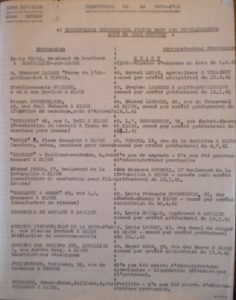 The first family tragedy resulting from the genocidal policy in France took place in 1943. Henriette, Clarisse’s younger sister, was arrested, along with her daughter Paulette. They were transferred to the Drancy camp and then deported to Auschwitz on Convoy No. 48 on February 13, 1943, where they were murdered.
The following year, Louis was also arrested, together with his wife Alice, on May 8. They were transferred to Dijon prison. Then on May 23rd, they were sent to Drancy, from where they were deported on May 30th, 1944 on Convoy No. 75. They were both murdered on arrival.
The Kommandantur also gave orders for Clarisse’s arrest. The mayor of Pontailler-sur-Saône, (perhaps to save time?), pointed out that Pauline Lévy was still living with the Weills and absolutely must go into hospital. In the meantime, Clarisse had to take care of her. At the beginning of June, Maurice Quirot, a doctor in Pontailler, who lived in the same street as the Weills, issued a medical certificate stating that Pauline Lévy was suffering from long-standing right hemiplegia. She therefore had to be hospitalized shortly. On June 26, 1944, Pauline Lévy was too weak and her condition meant that she could not be moved; Clarisse Weill’s arrest was therefore delayed. Nevertheless, the Kommandantur insisted that the deportation order be implemented without delay.
On July 4, 1944, at 2.30 p.m., two gendarmes from Pontailler-sur-Saône, following urgent German orders, went to Clarisse Weill’s home. They wrote a report about her arrest. 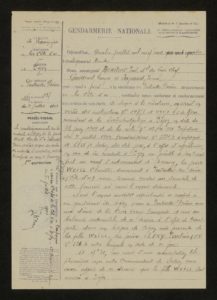 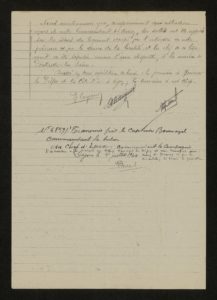 The report provides all the details of the arrest. In this account, Clarisse is referred to as “the female Jew Clarisse Weill”. She is no longer considered a woman but a “Jew”, to be exterminated. The gendarmes arrested Clarisse and entrusted her to a gendarme who came specially to drive her to Dijon. A woman from the Red Cross and a car ambulance were also there to take Pauline Lévy to the Champmaillot Hospices in Dijon.
Following the departure of the two women, the maire sealed up the premises in accordance with police instructions. The keys to the house were then labelled and deposited at the local town hall. The arrest record was sent to the Prefect of the Côte-d’Or and to the chief of police in Pontailler-sur-Saône.
Clarisse was then transferred to Drancy, where she was registered on July 9. The Regional Prefect of Dijon received confirmation of her internment on July 20, 1944. 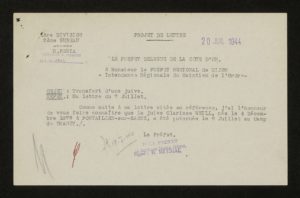 She was deported on July 31, 1944 on Convoy No. 77 and died in Auschwitz on August 5 of the same year. There is a mistake, however, in the note made in the margin of her birth certificate. It reads “died in Auschwitz on July 17, 1944”. On that date she was still in Drancy.
As early as December 1944, Louis’ in-laws began researching the fate of Louis, Alice and Clarisse. They wrote to the Ministry of Prisoners, Refugees and Deportees. The answer arrived a few months later: “she is presumed dead”.
Fanny, the eldest of the siblings, who married Edmond Ulmann in Switzerland, was the only one to survive the Second World War. She died in 1948.

Photograph of the war memorial with a plaque in memory of Clarisse, Louis & Alice Weill 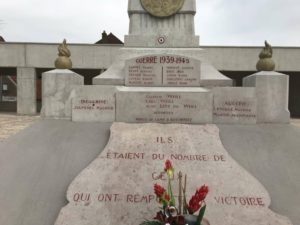 Clarisse Weill was almost certainly the last Jewish woman to be arrested in the Côte-d’Or, transferred to Drancy and deported. 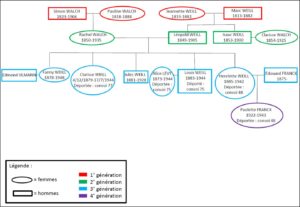 Annex 2 : the “list of names of Jews residing in Dijon to whom the special insignia was issued” 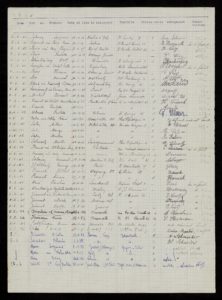 The signatures of Clarisse’s sister and niece, Henriette and Paulette Franck, can be seen on the list. 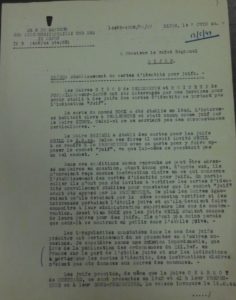 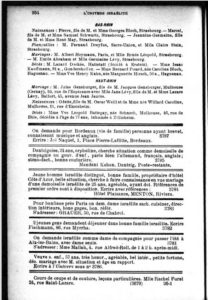