A class of 9th graders produces their “Convoy 77 project newspaper” 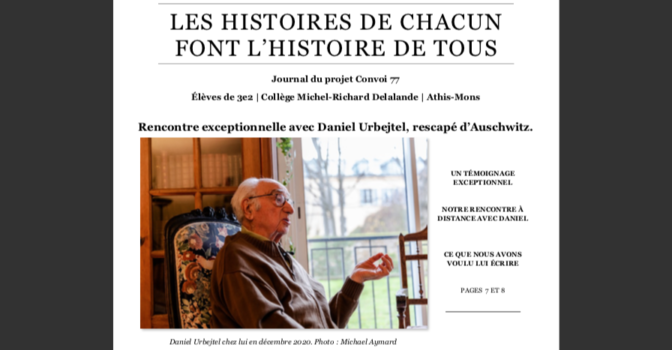 “Each person’s story becomes everyone’s story.” That’s the headline on the front page of the April 2021 edition of the “Convoy 77 project newspaper”, a digital journal produced by a class of 9th grade students at the Michel-Richard Delalande junior high school in Athis-Mons, near Paris.

The project, led by their history and geography teacher, Clément Huguet, gathers together the students’ contributions in the form of articles about the behind-the-scenes work done on the Convoy 77 project and the Holocaust in general.

Beyond being a record of their efforts, these articles, all written by the students, are a means of expressing their views and feelings about this singular assignment.

“We are working on the story of Adolphe, Fortunée, Claude, Jacques and Josiane Halimi,” writes Valentin, for example, about a family from Algeria who lived in Lyon during World War II prior to being deported on Convoy 77. “This project has been very beneficial to me because it has provided me with the knowledge to help prevent these horrors from happening again and to ensure that the victims are not forgotten.”

“The story of the Righteous Among the Nations, those “lights in the night”, has inspired us greatly and reminded us of the importance of being committed to combating all types of racism and intolerance,” says Anrif.

“Your story gives us hope”

For this edition, the students listened to the testimony of Daniel Urbejtel, the youngest French survivor of the Auschwitz-Birkenau camp. Due to the Covid restrictions, they were unable to meet him in person so his testimonial, recorded by their teachers, was played to them in class.

Since they were unable to speak to him in person, two of the girls, Ines and Beatriz, decided to publish a message, addressed to this very special witness, in the newspaper. “After discovering your story, even though we can’t really understand what you went through, we have tried to imagine the suffering that you and so many others who were deported from the Nazi camps went through”, they tell him.

“Your story also gives us hope, because it is a source of courage and commitment. The emotion we felt (…) will remain forever in our memory and in our hearts.”

As well as writing articles, the students published photos of “time capsules” that they had made, which are intended to serve as visual reminders for future generations.

Among their creations, which include photos, objects and printed texts, is a glass jar with yellow stars floating in it, as “a symbol of the persecution and discrimination of which the Jews were victims”, a box file with items that explain how the family members were separated after their arrest and photos from the period, and some boxes painted black, “to represent death”, filled with reminders of the victims’ lives before the Holocaust and of their time in the camps. 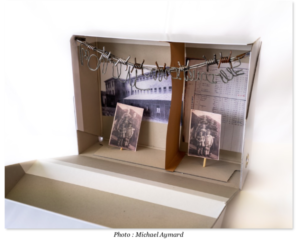 A box file containing reminders of how family members were separated after their arrest. Photo: Michael Aymard

“We thought about the archives used in our historical research and asked ourselves how we might reuse or enhance them,” explain Kailys, Shanel and Valentin. A “very interesting experience”, according to one of the first visitors, who came as a tribute to all those whose lives the students reconstructed.