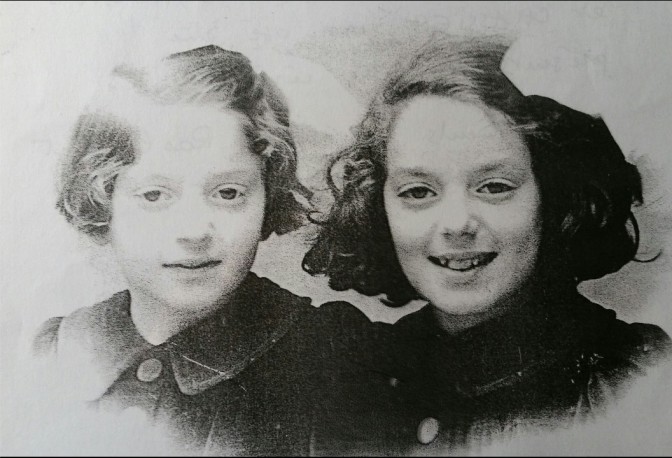 Léa (nicknamed Louisette, most probably on the right of the photo) and Nanette Grycman, deported in Convoy 77
Mordka Aron Grycman, known as Max, born on June 3, 1908 in Kielce, Poland, arrived in Paris in 1925. He was 17 years old and soon was set up as a tailor of leather goods, transforming one room of his rented apartment into a small workshop. He met and married Brandla Minc, also born in Poland. On September 29, 1931 their daughter Léa, to be nicknamed Louisette, was born in Paris’s 12th district, and on August 17, 1933, still in the same district of Paris, was born their daughter Nanette. They led the quiet life of hard-working Parisians, spending their holidays in the country at Savigny-sur-Braye in the Loir-et-Cher department.

When war was declared in September 1940, Max enlisted on the 18th as a Polish volunteer in the French army. He was incorporated into the 21e RMVE. He fought in the Battle for France and was taken prisoner in the Ardennes on June 21, 1940.
While he was a prisoner of war, Brandla and her daughters took refuge in Savigny with the Cholet family (sometimes spelled Chollet). The two little girls attended the local school.

Marshal Pétain came to power and set up the Vichy Regime, which promulgated anti-Semitic persecutions “in the name of the law”.
In July of 1942 Brandla was arrested. At the same time other Polish Jews were rounded up throughout the department. They were all immediately deported, never to return, to Auschwitz-Birkenau in Convoy 6 on July 17th. Louisette and Nanette, not yet targeted by the Germans, remained in the care of the Cholet family in Savigny-sur-Braye, though a witness has indicated that the girls stayed with a refugee of the name of Gross. They went back to school in September.

At the beginning of October, the Cholets were ordered to take the Grycman girls to Orléans. The husband obeyed.
Madame Cholet, widowed, was to testify after the war in 1956 about these events, declaring that she knew nothing of the girls’ fate.
On October 10th they were transferred to Beaune-la-Rolande with the other foreign Jews rounded up that day, this time including the children.
They were alone, without their parents, not knowing what had become of them, that their mother had died far away in the East, that their father had just been freed from his stalag on September 25, 1942 because of illness. He knew nothing of the whereabouts of his family. When he came home he found no one and sought refuge in with a family of Greek Christian friends in Lyon in the free southern zone.
There he who had enlisted to defend France against Nazi Germany was arrested by the French police on April 25, 1943. He was deported in Convoy 55 to Auschwitz, where he was “selected” for work duty and sent to Buchenwald, finally to be liberated in May 1945. Then began the desperate search for his family. Having been despoiled of all his belongings, he no longer possessed a workshop or anything else. It was not until 1949 that he was able to recuperate his apartment.

Louisette and Nanette had been removed from the Beaune-la-Rolande camp and placed by the UGIF in three successive orphanages that were tightly controlled by the Nazis.
In July 1944 they were at the Saint-Mandé center. Léa and Nanette are pictured, along with the little Korman girls, in the emblematic photograph shown below of the children at the Saint-Mandé center.
It was there in the middle of the night of July 21st that the commandant of the Drancy camp, Aloïs Brunner in person, came to arrest them. They were deported, as were all the children arrested on that date in the last big convoy, number 77, on July 31, 1944, three weeks before the liberation of Paris. Not a single one of these young children was to return.
In 1950 Max made the acquaintance of a young woman named Édith, who had been deported from the Lodz ghetto to Auschwitz. She, too, was the only surviving member of her family. They married and had two daughters Sylviane and Hélène, who now live in the United States. Max died in 1986, the grandfather of three boys. Édith was still living in Paris as of the beginning of 2018.
Since the year 2000 there has been a commemorative plaque to Brandla, Louisette, and Nanette at the foot of the War Memorial at Savigny-sur-Braye.

Sources:
Archives of the Loir-et-Cher department
Board of the Archives of the Victims of Contempoary Conflicts, Caen
Serge Klarsfeld Memorial
Testimony taken in 2000 at Savigny
Édith Grycman’s testimony and a photo supplied by her