Cycling to the Auschwitz camp: the memorial adventure of a young man in search of meaning

Home Cycling to the Auschwitz camp: the memorial adventure of a young man in search of meaning 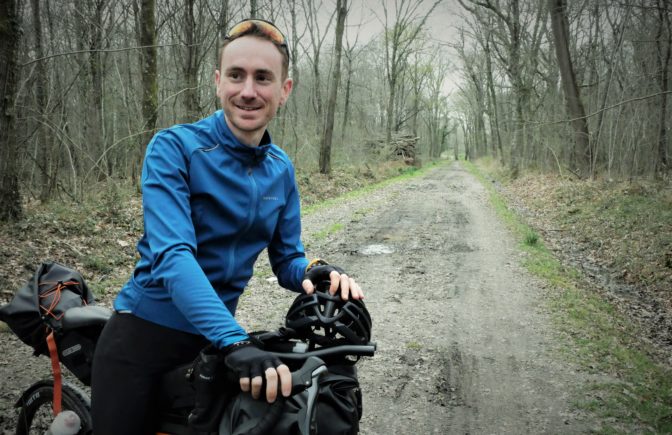 At nearly 28 years old, Fabien Devilliers, a history enthusiast, set off on a major challenge: to cycle to the Auschwitz extermination camp from the Gurs camp in Béarn. Between April 24 and the beginning of July 2022, he will cycle nearly 1900 miles in 80 stages through France, Germany and Poland, visiting various World War 2 memorial sites along the way.

Through this project, which he calls a “memorial adventure”, he hopes, among other things, to raise funds for UNICEF.

Convoy 77 has decided to follow his journey by devoting three articles to him, one prior to his departure, one during his journey, and one at the end.

This is the pre-departure interview.

How did your project come about?

I was a digital mediator for two years in Pau, [in the south of France]. In practical terms, I ran workshops in the local area to teach people how to carry out their administrative procedures online, and how to manage the transition to “all-digital technology”.

I was confronted with people in despair, people who found themselves isolated and who no longer had access to certain services because of this paperless system. Their distress hit me right in the face.

It made me realize that we have a problem, as a society. Perhaps we have lost a kind of momentum. We are all a little pessimistic and disheartened by what is ahead of us: inflation and decreasing buying power, a war that is not so very far away, global warming etc. There is a sense of fear, which can immobilize us and turn us inwards as opposed to bringing us together.

So, I said to myself that I should quit my job and do something that I would enjoy. Above all, I wanted to commit myself to a cause that was important to me. In this case, it is the history of the Second World War. But I think you have to get actively involved, no matter what the cause is. It’s urgent. And it gives some meaning to our lives.

Why this particular idea: cycling to Auschwitz?

When I was 19, I was a member of the local council of my town, Allassac, in the Corrèze department. I was given the task of being the standard-bearer during remembrance ceremonies, and then I was master of ceremonies. One day, during one of these ceremonies, I said to myself “For me, this is not the way to commemorate the dead.”

I could see then that young people were not interested in these memorial events, and I understood them. I thought about all this after I resigned and I wanted to do things my own way: to visit places, to understand the mechanisms behind the events of the Second World War and to learn from them.

I had the idea of going to Auschwitz because it is a central place: it epitomizes the horror; it is a stereotypical image of the war. And it was the end of the road.

As for cycling, I really like the sport and the idea of pushing myself. I thought it would be good to be able to stop easily at places along the way.

In what other ways do you intend to commemorate the events of the Holocaust?

What I find inspiring about this memorial venture is not only looking back into the past, but also conveying the message of the resistance fighters and Holocaust survivors to young people and ordinary people: “We lived through the worst, but we will do everything we can to make the future better”.

I am hoping for an adventure with lots of encounters and interaction, with strangers or with groups of students. We shall see…

I plan to visit, among other places, the Field of Martyrs in Tulles, the Memorial Centre at Oradour sur Glane, Montluc prison, the Maison d’Izieu, the Plateau des Glières [editor’s note: an important French Resistance area], and the Struthof camp.