Award ceremony at the Polin Museum of the History of Polish Jews, in Warsaw‎

Home Award ceremony at the Polin Museum of the History of Polish Jews, in Warsaw‎ 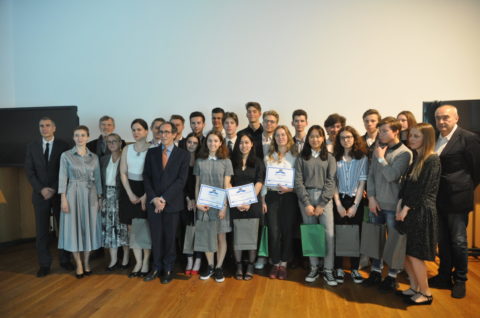 On May 26, 2019, pupils from the French high school René Goscinny, in Warsaw, Poland, received an award their participation in the Convoi 77 project.

They received their certificates at the Polin Museum in the presence of several official representatives: Pierre Lévy, the French ambassador to Poland, Magdalena Turowska, Assistant Director of International Cooperation at the Polish Ministry of Education, Georges Diener, Cultural Cooperation Advisor and Director of the French Institute of Poland, Zygmunt Stepinski, director of the Polin Museum, Jolanta Herzog, director of Warsaw Jewish Historical Museum, Louis-Albert Mensdorff-Pouilly, principal of the René Goscinny high school and Georges Mayer, president of the Convoy 77 association.

The students wrote the biographies of seven people deported on 77th convoy to Auschwitz. They started their research on January 26, 2018.

The French ambassador, Pierre Lévy, underlined the importance of this work and its contribution to the commemoration of the victims of the Holocaust.