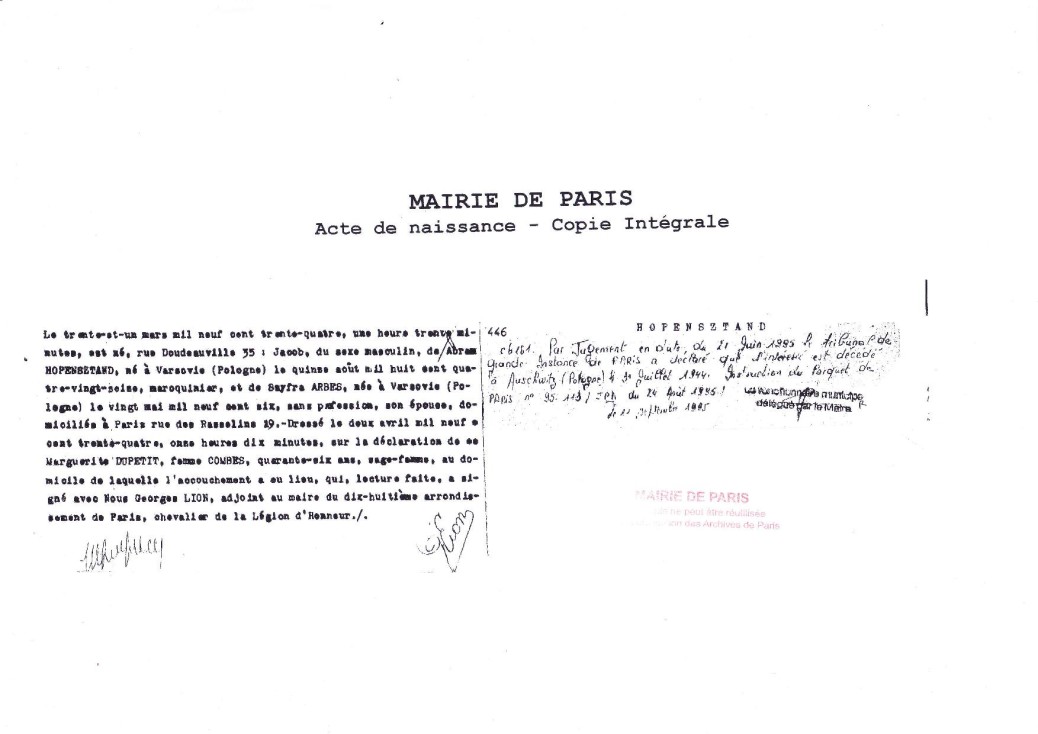 Sketch for a biography of Jacob Hopensztand, for whom we have no photo, but whose memory is honored by Paul Curtz.

Jacob HOPENSZTAND was born on March 31, 1934 at 35 rue Doudeauville in the 18th district of Paris. He was the only child of Abram HOPENSZTAND, born in Warsaw on August 15, 1896, and of Szyfra HOPENSZTAND neé Arbès, born in Warsaw on May 20, 1906, housewife.
Before the war the family lived at 19 rue des Rasselins in the 20th district.
During the war Jacob and his parents lived at 12 Passage Gambey in the 11th district. The author of this biography specifies that Abram, Jacob’s father, had attempted and perhaps managed to join the Polish army.
The family was arrested in the roundup of the Vel d’Hiv on July 16-17, 1942. While his parents were deported with no return, young Jacob was freed on February 13, 1943. Ill with tuberculosis, he was sent to Montgeron after being assigned to the Centre Lamarck of the UGIF (General Union of the Israelites of France).
He arrived in theVarenne UGIF center at 57 rue Georges Clemenceau in la Varenne-St-Hilaire at the end of 1943. Paul Curtz, who wrote this biography, was already there since the beginning of that year. The only two boys in the centre, they were enrolled together in the school on the rue Léon Maurice. Their teacher, Gilberte Chéry, was twenty years old. For his tenth birthday on March 31, 1944 Jacob was given four biscuits instead of the usual two.
The “liberation” sheet reproduced below throws some light on Jacob’s two passages at Drancy.
He was arrested on July 23, 1944 and deported with no return to Auschwitz-Birkenau.
He had two big brown apprehensive doe eyes.